Tessa Bailey, bestselling author of smokin’ hot romance, has a new book out and I AM SO EXCITED!

Whhhhyyyy am I SO EXCITED? Well peeps, this book is male/male, one of my personal fave romance sub-genres. Read on for a sexy excerpt and to learn more about Wound Tight!

When CEO Renner Bastion walks into a room, everyone keeps their distance. Well, everyone but the sarcastic, tattooed, Boston-bred security guard whose presence has kept Renner in New Jersey longer than intended. As if the unwanted attraction isn’t unsettling enough, Renner finds out his protector isn’t as unavailable as originally thought.

Milo Bautista just came out to his wealthy, ultra-confident boss, a man he secretly respects and admires…in more ways than he’ll admit. Worldly, experienced Renner would never look in his direction, let alone share some of that confidence he wears like a cloak, so Milo has set his sights on someone else to be his first.

Until Renner offers him private lessons in seduction…

Renner had already opened the driver’s side door, but he slammed it closed now, striding back toward Milo with a curious look on his face. “Actually, I have a question.” He seesawed his hand between their chests. “What are you doing? Why do you insist on following me? I’m a grown man, Milo. I have the right to get mugged in peace.”
“Wow. You just said that out loud.” The back of Milo’s neck pulled taut at the line of questioning, but he forced a belligerent expression. “I’ve told you before, this is my job—”
“No.” Renner shook his head. “No. You’re not assigned to me. I didn’t ask you to be my watchdog. This is all of your own free will.”
Damn. Milo hadn’t expected this. At least, he hadn’t expected Renner to get in his face like this. So…close. Like the way he got close with other men? What did he think about Milo’s face from such a scant distance? “I…uh.” Milo stepped back, replacing the gun in its holster on his belt. “Like I said, you’re welcome. I’ll see you tomorrow.”
“I’m going back to the city in the morning.” That statement hung in the air between them like low fog. Or
was Milo only imagining it? Just like he was imagining the hard drumming inside his rib cage? “Before I go, Bautista, I want you to tell me what all this is about. We don’t even like each other, right? And yet here you are. You’re constantly around, worrying about my safety. I…” He loosened his tie with rash movements. “Perhaps the differences in my… biology make me seem different from someone like you, but I’m the furthest thing from weak—”
“That’s what it is,” Milo blurted, shocking himself. What was the point in keeping the truth to himself anymore, though, if Renner was leaving in the morning? “Not the part about you being weak. I don’t think that. The opposite, actually. You’ve got a pretty nice right hook there, boss man.”
Renner raised an eyebrow.
“Okay.” Christ. His blood was flowing in seventeen directions, his tongue weighing as much as a horse in his mouth. This was real. This was happening. “Okay, I’ve been watching you. All right?” 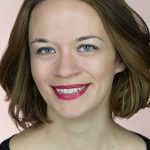 Tessa Bailey is originally from Carlsbad, California. The day after high school graduation, she packed her yearbook, ripped jeans and laptop, driving cross-country to New York City in under four days.

Her most valuable life experiences were learned thereafter while waitressing at K-Dees, a Manhattan pub owned by her uncle. Inside those four walls, she met her husband, best friend and discovered the magic of classic rock, managing to put herself through Kingsborough Community College and the English program at Pace University at the same time. Several stunted attempts to enter the work force as a journalist followed, but romance writing continued to demand her attention.

She now lives in Long Island, New York with her husband of nine years and four-year-old daughter. Although she is severely sleep-deprived, she is incredibly happy to be living her dream of writing about people falling in love.

Spotlight & Excerpt: The One You Can’t Forget by Roni Loren #BookReview
Read More
318

MUST SEE!Five heart-warming holiday romances you should read this week
Read More
168

LAST DAY to nominate your 2016 romance favorites!
Next

Spotlight & Excerpt: The One You Can’t Forget by Roni Loren #BookR...
80

Got the post-Olympic blues? Here are four steamy gay romances to take the edg...
290
View All
Compare
Go
GraveTells Romance