Ana is a badass. Straight up. And she’s been training with Sector One’s newest rider, the scarily, eerily efficient Makhai soldier Ashwin. As the first female Rider, Ana carries a heavy burden of responsibility and has set a rigid set of rules to keep herself from failing and disappointing a whole new generation of girls who look up to her as a role model.

People who wanted to challenge the status quo didn’t get to have temper tantrums. They had to be smarter, and calmer, and faster, and better. Beyond reproach, beyond critique. As perfect as a human being could be, because you could whine about fair and unfair all you wanted, but at the end of the day, you did the extra work or you failed.

The sex is, of course, scorching hot. I don’t think Kit Rocha could write anything boring or staid if they tried. This author team keeps finding unique, believable ways to pen each new couple with heart and heat and personality.

She traced a finger over Deacon’s brow and had to acknowledge that he was both. Capable of horrible deeds as well as heroic ones. A man who had done so much harm, but also so much good.

There’s a new threat to Gideon’s Riders, and it’s gunning for Deacon. The Big Bad wants blood, and he wants it up close, personal, and painful. Where Ashwin was a transition story—redemption for one of the deadliest characters in the Beyond series and an up-close introduction to the Riders—Deacon introduces what will likely be the through-plot for the Gideon’s Riders series, and gives a vulnerable peek into the Riders’ fearless leader and his shadowy past.

“If you spend your life only being satisfied when you’re perfect, you’ll be worse than disappointed. You’ll be nuts.”

Kit Rocha’s writing always delivers punch and power, but their almost lyrical prose is what gets me every time. They breathe life into characters with such complexity and humanity that it’s impossible not to feel a kinship with them all.

In the quiet times between battles, Ana could rationalize the blood she was about to spill as heroic and righteous. But in this moment, with her heart pounding and every sense alive…
The truth was simpler, starker. Ana was a Rider because she was good at it. Because she liked being good at it.

Sector One is a unique place, even amongst the open-minded, often rough-and-tumble settings of other romance and erotic dystopian novels. The Sector is grounded in faith—the people believe that Gideon Rios is one step away from God, and many of his family have been sainted. But their religion does not discriminate along race or gender lines. Polyamory—true multi partner, long-term family units—are the norm rather than the exception. Black, white, Latino, Gay, lesbian, bi…those discriminatory terms have no voice here, no power to break a person down or shove them into a box made from someone else’s bias. This story world, this sector that survived a world apocalypse and a brutal civil war, sets the example for the kind of harmony and community we could have if only we stopped judging and killing each other long enough to give a damn.

This story world, this sector that survived a world apocalypse and a brutal civil war, sets the example for the kind of harmony and community we could have if only we stopped judging and killing each other long enough to give a damn.

Recommended for readers who…

This review copy was provided by the Author. No compensation was received for this review. 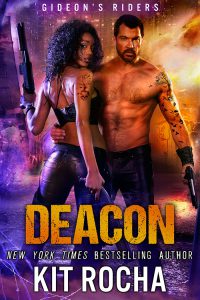 Ana has trained most of her life to achieve one goal: to prove that anything men can do, she can do better. Now she’s Sector One’s first female Rider, and being the best is the only way to ensure she won’t be its last. Distractions aren’t allowed--especially not her painful attraction to the reserved but demanding leader whose stern, grumpy demeanor has already gotten into her head.

Deacon has spent the last twenty years trying to atone for his past, but the blood he spilled as a mercenary and assassin will never wash away entirely. If his riders knew the extent of his sins, he’d lose their trust and respect. It’s easier to keep them all at arm’s length, especially Ana. But his newest recruit’s stubbornness is starting to crack his defenses.
And their sparring matches are driving him wild.

The passion sparking between them can’t be denied, but neither can the vengeance barreling toward Deacon. When his old squad comes back to punish him for his betrayal, Ana and the Riders are squarely in the line of fire. The only way to save his people may be to make the ultimate sacrifice.

But first, he has to convince Ana not to follow him straight into hell.

MUST SEE!You, Me & Her by Tanya Chris #BookReview #Polyamory
Read More
242

MUST SEE!Surrender the Dark (The Dark #1) by Tibby Armstrong #BookReview #giveaway
Comments
Leave a response

The top 5 signs that your man is a Wahya from PNR author Kristal Hollis! #Giv...
Follow GraveTells on…
Praise for GT
"Awesome book blog! Love the sites you have taken us to!" ~Stephanie
The new, improved PODCAST

Spotlight & Excerpt: The One You Can’t Forget by Roni Loren #BookR...
49

Got the post-Olympic blues? Here are four steamy gay romances to take the edg...
221
View All
Compare
Go
Do NOT follow this link or you will be banned from the site!