DaVinciKittie (DVK): Please help us welcome the fab Kit Rocha, author team extraordinaire and the masterminds behind the scintillating Beyond books set in a dystopian future of our own world and showcasing the legendary O’Kane gang, rulers of Sector Four beyond Eden’s pristine walls. Also Joining us is Rhianna from Rhi Reading, a fellow romance blogger and the lovely lady who turned me on (*snicker*) to this series. Thanks so much for joining us today, ladies!

Kit Rocha (KR): Thanks for having us! We’re excited to be here!

RhiReading (RR): Thanks for inviting me to join in DVK! A series this deliciously sexy and shameless is hard not to turn your friends on to. *wink*

DVK: The hedonistic anything goes atmosphere of Sector Four is one of the hallmarks of the O’Kanes and, I believe, part of what makes the series so alluring to readers. The descriptions of parties and scenes walks the line between too much and too little, usually finding just the right balance to titillate and intrigue without being lewd or offensive. Is it difficult to walk that line? Do you find yourselves going back to scene to add more heat or tone it down very often?

KR: I think the biggest thing we tried to do was avoid anything gratuitous, because that’s really the point–to us, anyway–where things slide over that line. Trust me when I say there’s plenty of stuff going on at those parties that isn’t described for the sake of explicit detail. If it’s something a character would notice or appreciate, it goes in. Otherwise, y’all will have to use your imaginations. LOL

RR: I’ve noted it in my reviews but I find the sex positivity of the O’Kanes (especially when it comes to the women) to be really refreshing even within the erotica genre. There’s a certain anything-goes quality that makes for some pretty creative play and it’s utterly shameless. Do either of you find that type of freedom and openness to be challenging to write? Did you set out hoping that in writing such attitudes about sexuality and pleasure, you’d have an impact on how your readers—whom I assume are predominantly female—feel about their own intimate lives on a personal level?

KR: Thank you! And yes! Yes yes yes and YES, to all of it. It’s challenging to write because we don’t live in a society like that, where sexuality is celebrated and explored in a positive way. Often times, even the ways in which we’re encouraged to be sexual can be weird and unhealthy. So it was absolutely a goal of ours from the start to lay this out for our readers, a place where women are “marked” and it looks like they’re owned, but really? No one owns anyone.

DVK: Every O’Kane character is unique and individual and striking in their own ways. Where do you get your inspiration for the standout personas like Dallas and Lex?

KR: Dallas and Lex might be cheating a little bit. LOL They’re the leaders of Sector Four, so they have to be huge, larger-than-life personalities. I suppose we start from there–who would you have to be to run a place like this? What traits would you need to have?

DVK: It seems like most of the O’Kanes we’ve seen so far are somewhere in their 20s-40s. Why aren’t there any older members of the gang?

KR: Dallas might be the oldest. The gang is kind of rough and tumble, so anyone significantly older would have a desk job, so to speak. But there are older folks around that they depend on for guidance and mentorship. One of them appears in Beyond Pain, and there’ll be another pop up in the next book.

DVK: Six has been through a lot in her life and it’s affected her personality and reactions in a major way. Bren also has a survivor’s background, and the kind of military history and training that leaves emotional scars. How do you get inside the head of a character like that? Does it affect you to be so intimate during the writing and planning process with these personalities that are so damaged?

KR: I don’t think it can NOT affect you. I mean, part of you has to be involved not only in writing these characters, but in their genesis. And it has to come from somewhere. Not like the old adage about writing what you know, not always that strict, but I think there’s a liiiiiittle bit of truth in that. You have to start from something you know, something you’ve felt, and relate that to your character. It’s tough. You cry. But you laugh, too, and it’s all worth it.

Beyond Pain is now available! Snag it from Amazon here!

KR: Mad is very pansexual. He doesn’t really differentiate between men and women when it comes to choosing his sexual partners, so I think it’s not outside the realm of possibility that he could wind up falling in love with a man. (But that’s all spoilery, so I’ll leave it at that for now. LOL)

RR: Most fans have a favorite O’Kane (or two). With Beyond Pain having several scenes where characters who aren’t the central hero and heroine get a little focus, everyone’s sure to be pleased. With two of you playing in the world do you have favorites to write or one that just comes easier to you while another refuses to come to you?

KR: We do. My favorite (I’m Donna, BTW) to write is Lex. But my favorite character overall is Ace–and I couldn’t write him to save my life. His voice will not come to me. And he’s totally Bree’s favorite to write because he gets to say “the most ridiculous things.” LOL

RR: One of the first things that drew me to the Beyond series was the ink. I still haven’t been able to commit to a tattoo even though I’ve always wanted to. As you guys developed the concept for the series what made you decide that taking ink or wearing someone’s mark was going to be such an important element in the storytelling?

KR: Visual identification is an important part of many cultures, whether you’re talking about ink or hairstyles or clothing or fabric colors. And tattoos have a long-standing association with rebellion, with being outside the norm. You don’t get much more “outside” than the sectors.

RR: I loved the small references to other major cities, besides Eden, in Beyond Pain. Is there a possibility we might get to see what life is like in the other locales as the series continues? Can you tell us some of the history of Eden and what happened to cause the break with the sectors?

KR: A lot of people ask about this, and it’s definitely going to be covered eventually. But it’s like everything else–it has to happen organically. Dallas and Jasper aren’t going to sit around, talking about the solar storms and the big flare that fried the power grid. They know all that stuff, why belabor it? But it will come up more and more as we progress. Because the history of Eden isn’t exactly something ANYONE knows for certain. They know what they’ve been told, but that’s not necessarily the truth.

Click the image above for a free outtake from the Beyond series!

DVK: We know Kit Rocha (and also Moira Rogers) is the pen name for a pair of authors, working together. What inspired you to write as a pair? Do you find it more challenging than writing as individuals, and what are your biggest obstacles to overcome as a team?

KR: It obviously requires teamwork. And yelling. And getting over it. LOL We need to make sure we’re on the same page with everything, or it’ll be a hot mess. So communication and compromise are essential.

DVK: The Beyond series is your second writing effort as a team (the first being the stories written as Moira Rogers) and has been wildly successful with the fans who’ve discovered it. As self-published authors, how difficult is it to get your name out there and keep up the hype between and before releases?

KR: We all have very short attention spans these days. LOL So the trick is to have people remember that you exist in between releases. I think the biggest thing is to write books they can’t forget. Aside from that, we interact a lot with readers, not only to keep our name out there, but because our readers are awesome!

DVK: Your website and merchandise design is FAB! I have my O’Kane coffee mug proudly displayed on my desk holding my favorite pens (although I’m considering ordering a second so I can actually drink out of it) and your logo is inspiring. Do you do your own art and product design?

KR: Bree designs all of our artwork, from the covers to the merchandise. She even did the O’Kane logo. Every time a cool new product or image pops up, it was all her.

See all the delicious merch here!

DVK: Thanks so much for stopping in to chat with us today. It has absolutely been our pleasure.

KR: No, thank you! We’re hard at work on the next release, which will be a novella in an anthology called Marked with Lauren Dane and Vivian Arend. The title is Beyond Temptation, featuring Ace’s apprentice Emma and everyone’s favorite sector hacker, Noah. And then it’s time for Beyond Jealousy!

Find out more about the O’Kanes at their website here!

Can’t get enough of the gang? You can take ink and become a member! Sign up and get your very own temporary tats here…

Kit Rocha is actually two people—Bree & Donna, best friends who are living the dream. They get paid to work in their pajamas, talk on the phone, and write down all the stories they used to make up in their heads. 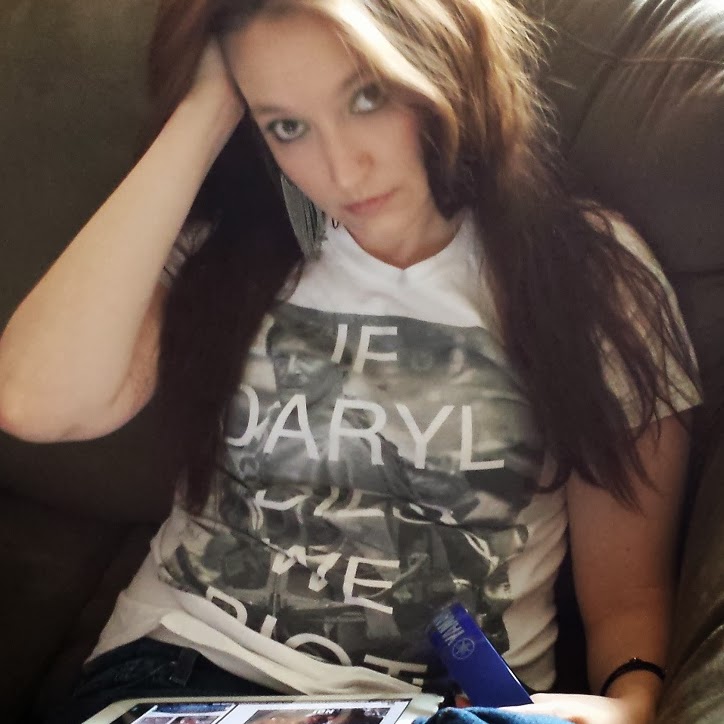 For almost 5 years, RhiReading has been filling the web with book reviews and news with a focus on speculative fiction with romantic themes. When creator, Rhianna Walker, isn’t writing about the latest shapeshifter or dystopian universe she can be found obsessing about geek culture, cooking, and saving money—so she can buy more books, of course. She lives in Montana with her husband, two children, a menagerie of critters, and a rather large collection of action figures.

To enter to win, leave a comment telling us who your favorite O’Kane is and why, or (if you’re new to the series) what you’re looking forward to most when you read it, then fill out the Rafflecopter below. Good luck!

MUST SEE!New GraveTells podcast! Join me and Eden Bradley as we chat candidly about kink IRL vs in romance #podcast
Read More
1846

Book Tour & Giveaway (US/Int): Set your Spotify to Heather Gunter’...
Follow GraveTells on…
Praise for GT
"What a lovely experience this has been. You are the "cat's meow," and I've loved working with you. Thanks so much for the great publicity, it's an author's dream come true :-)" ~ author Moriah Densley
The new, improved PODCAST

Got the post-Olympic blues? Here are four steamy gay romances to take the edg...
306
View All
Compare
Go
GraveTells Romance